Green Girls Graffiti manga announced on Friday that a new Hanasaku Iroha anime
adaptation has been green-lit for next year.

Hmm.. somehow this series flew past my head last season.
Gonna try my luck with this one. Got some free time between 25th Dec and 1st Jan (Still workin..sigh).

Happy holidays peeps and keep safe. Oh and be good.

Heya guys, some ppl/bots been giving me grief with new accounts being registered and thus it has been disabled until otherwise.

In an interview that the Japanese website Hollywood Channel posted on Sunday, Studio Ghibli producer Toshio Suzuki revealed that studio co-founder Hayao Miyazaki’s next work is “not the sort of work that everyone in the audience can relax and watch.”

According to the job listing, the film is “slated to be completed in Summer of 2013.” 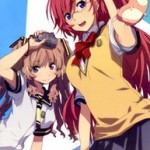 Looks like Goro Miyazaki the person behind “From Up on Poppy Hill” (Kokuriko-Zaka Kara) will be coming out with
the next title around 2013. Better be epic

. For more info please visit the link which has a very good breakdown of the situation .

The place to chill out !